http://krishnatube.com/video/880/Lord-Caitanya-Meets-With-Sanatana-Goswami-Puppet-Show
Posted by Dr Ganesh Narasimhan at 7:55 AM No comments:

Be satisfied with the minimum Necessities of Life

Email ThisBlogThis!Share to TwitterShare to FacebookShare to Pinterest
Labels: Be satisfied with the minimum Necessities of Life 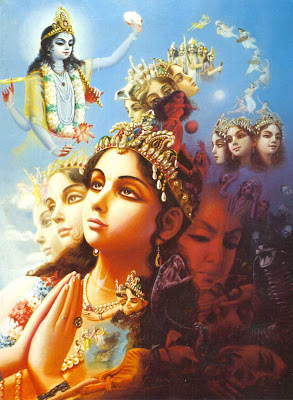 The spiritual world has been calculated to comprise three-fourths of the energies of the Supreme Lord, and the material world is said to comprise one-fourth of His energy, but no one can understand what this three-fourths is, since even this material universe, which comprises only one-fourth of His energy, cannot be described. Trying to convey to Sanatana Gosvami something of the extent of one-fourth of Krishna's energy, Caitanya Mahaprabhu cited an incident from Srimad-Bhagavatam in which Brahma, the lord of the universe, came to see Krishna at Dvaraka. When Brahma approached Krishna, the doorman informed Krishna that Brahma had arrived to see Him. Upon hearing this, Krishna inquired as to which Brahma had come, and the doorman returned to Brahma and asked, "Which Brahma are you? Krishna has asked."

Brahma was struck with wonder. Why did Krishna ask such a question? He informed the doorman, "Please tell Him that Brahma, who is the father of the four Kumaras and who has four heads, has come to see Him."

The doorman informed Krishna and then asked Brahma inside. Brahma offered his obeisances unto the lotus feet of Krishna, and after receiving him with all honor, Krishna inquired about the purpose of his visit.

"I shall tell You of my purpose in coming here," Lord Brahma replied, "but first I have a doubt which I ask You to kindly remove. Your doorman told me that You asked which Brahma has come to see You. May I inquire if there are other Brahmas besides me?"

Upon hearing this, Krishna smiled and at once called for many Brahmas from many universes. The four-headed Brahma then saw many other Brahmas coming to see Krishna and to offer their respects. Some of them had ten heads, some had twenty, some had a hundred and some even had a million heads. Indeed, the four-headed Brahma could not even count the Brahmas who were coming to offer their obeisances to Krishna. Krishna then called many other demigods from various universes, and they all came to offer their respects to the Lord. Upon seeing this wonderful exhibition, the four-headed Brahma became nervous and began to think of himself as no more than a mosquito in the midst of many elephants. Since so many demigods were offering obeisances unto the lotus feet of Krishna, Brahma concluded that the unlimited potency of Krishna could not be estimated. All the helmets of the various demigods and Brahmas shone brightly in the great assembly, and the prayers of the demigods made a great sound.
"Dear Lord," the demigods said, "it is Your great mercy that You have called us to see You. Is there any particular order? If so, we will carry it out at once."

"There is nothing especially required of you," Lord Krishna replied. "I only wanted to see you together at one time. I offer My blessing to you. Don't fear the demons."

"By Your mercy, everything is all right," they all replied. "There are no disturbances at present, for by Your incarnation everything inauspicious is vanquished."

As each of the Brahmas saw Krishna, each thought that He was only within his universe. After this incident, Krishna wished all the Brahmas farewell, and after offering respects to Him, they returned to their respective universes. Upon seeing this, the four-headed Brahma at once fell down at the feet of Krishna and said, "What I thought about You at first was all nonsensical. Everyone may say that they know You in perfection, but as far as I am concerned, I cannot begin to conceive how great You are. You are beyond my conception and understanding."

"This particular universe is only four thousand million miles broad," Krishna then informed him, "but there are many millions and billions of universes which are far, far greater than this one. Some of these are many trillions of miles broad, and all these universes require strong Brahmas, not just four-headed." Krishna further informed Brahma, "This material creation is only a quarter manifestation of My creative potency. Three quarters of My creative potency is in the spiritual kingdom."

After offering obeisances, the four-headed Brahma parted from Krishna, and he could understand the meaning of the Lord's "three-quarters energy."
Posted by Dr Ganesh Narasimhan at 10:50 AM No comments: